Flash floods are a danger that we must expect in the Czech Republic and be prepared for. This type of flood is characterized by its very rapid development. Over a period of tens of minutes to several hours, there is a sharp rise in water levels in a small watercourses, which quickly returns to normal.

About the topic Ongoing projects

Flood flows depend on many factors, such as the intensity and duration of the rain, the size of the affected area, and also on the physical and geographical characteristics of the affected area. The main factors are the size and shape of the basin, slope of the terrain, soil permeability, and land use. Saturation of the river basin with previous precipitation also has a significant effect. If the intensity of precipitation significantly exceeds the rate of infiltration into the soil, there is dangerous surface runoff and subsequent flooding, even with an unsaturated soil profile. The negative effects of flash floods are exacerbated by inappropriate land use patterns. After concentrating the runoff into the river network, the flood wave acts with its dynamic force, which is further amplified by mud and other material carried by the water. Flash floods can cause significant property damage and endanger the lives of people in the affected area. Quite often, the situation is exacerbated by clogging of culverts or bridge profiles, or creating barriers. 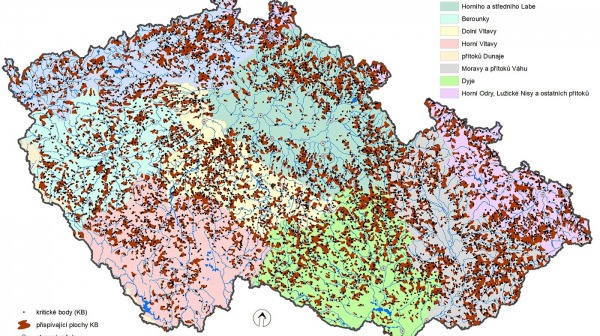 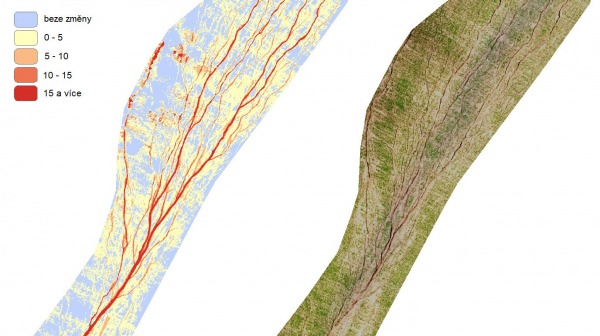 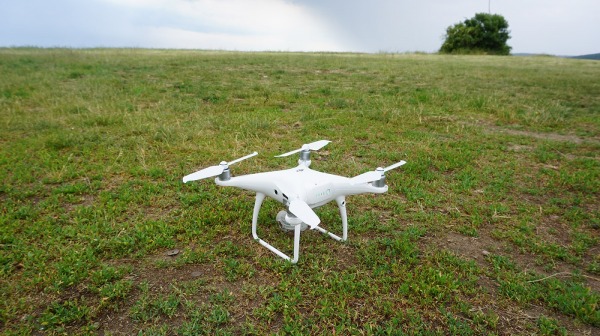 Monitoring of past events – recording and evaluation of impacts

Unmanned aerial imaging methods are being developed to record and evaluate the negative impacts of floods from torrential rainfall. This enables fast and accurate recording of the range or progression of floods, especially on agricultural land but also in built-up areas. To do this, the Brno branch of TGM WRI has a UAV system (drone) that can be used for taking aerial photographs, panoramic photographs, mapping less accessible areas, and creating detailed 3D terrain models. The data obtained can be presented as orthophotomaps, digital surface model, 3D visualization of the area, etc. The outputs are suitable for basic measurement of areas, distances and volumes on maps and three-dimensional models, but also for more complex geographical analyses and cartographic calculations.

Furthermore, the volumes of soil carried away by erosion from fields, which often contribute to the damage in built-up areas, are evaluated using an erodometer. Individual significant floods from torrential rainfall are monitored using information from the Czech Hydrometeorological Institute (CHMI). Detailed knowledge of the causes, progression, and consequences of individual flood events obtained by the above procedures allows us to design measures that will be cost-effective.

Location of places endangered by floods from torrential rainfall

The catastrophic floods in 2009 and similar events in the following years clearly, and with tragic consequences, confirmed that the flood risk for built-up areas can occur even in places with no watercourse. Based on the evaluation of factors influencing the formation of concentrated surface runoff and sediment transport, TGM WRI staff developed a methodology for the identification of so-called critical points. These are places where surface runoff caused by torrential rain can enter the built-up part of an urban area when other critical conditions are met. At the national level, the methodology output serves as a basis for the creation of flood plans, zoning plans, and land consolidation.

Based on the above criteria, a total of 9,261 critical points were identified in the Czech Republic (see map). The location of individual critical points can be found through the map portal www.povis.cz.

Possibilities of protection against floods from torrential rainfall

We propose suitable anti-erosion and anti-flood measures at the so-called contributing areas of critical points within the framework of spatial planning documentation, land consolidation, and river basin plans. This is a proposal for a comprehensive system of technical, biotechnical, organizational, and agrotechnical measures in a catchment area and operational measures pursuant to Section 65 of Act No. 254/2001 Coll. On Waters. We use procedures and tools for these proposals which are the result of systematic research on flash floods. The essence of effective flood protection, especially in urban areas, is therefore the creation of comprehensive systems of protection against the negative effects of floods and erosion. In addition to anti-erosion and flood protection, these systems increase the retention capacity of the landscape and its ecological stability.